Cover by the great Jim Aparo

As a child, I read and reread my copy of “The Greatest Batman Stories Ever Told” softcover religiously (along with my assorted graphic novels and weekly comic book hauls from the comic shop). A particular story from this collection that I go back to from time to time is “The Brave and the Bold” issue #197 (originally released in 1983) titled “The Autobiography of Bruce Wayne”, written by Alan Brennert, with pencils by Joe Staton (who co-created the Huntress with writer Paul Levitz), inks by George Freeman, and colors by Lovern Kindzierski. Told in twenty three pages, this Bat-yarn is entirely in flashback from Bruce Wayne’s point of view as he’s writing his memoirs. The art is stunning, with Bruce’s classically square jaw, a pipe in his mouth, and the gorgeous yellow and orange colors conveying a Bruce who is reminiscing as an older man. Although this Bruce is the Batman from Earth-2 (which is an alternate dimension and not the “real” DC universe), the personality and motivations are quintessential Bruce. The focus of this tale is the relationship between Batman and Catwoman and how they both reveal to each other (and learn from each other) their true selves. Every time I read or even glance at particular pages from this issue, I get choked up and at times even well up with tears.

Alan Brennert knows Batman, despite only having written five Batman tales in his career (he was a successful sci-fi and television writer, as well as being a story editor on the “Wonder Woman” TV show). He also knows Commissioner James Gordon and Selina Kyle (Catwoman) extraordinarily well. He can convey so much in such short vignettes that a lesser writer would find impossible to do in a longer tale. He sets scenes up effortlessly, relating just enough history between the characters so that the reader knows that this Batman has gone through much in his life. Commissioner Gordon wonders aloud to Batman why they keep fighting criminals because they simply return and continue to wreak havoc. Batman, appropriately, replies, “We do what we’ve always done, Jim–what we have to do.” He’s on an unending mission. The Justice Society has disbanded and it’s been only him, Robin, Superman, and Wonder Woman left to fight the scourge of criminal wrongdoing that plagues their world. Bruce, while attending a wedding in his flashback, says that only Dick (Robin), Alfred, and Kathy Kane (Batwoman) know his true self. We see a Bruce who fears being alone, wondering what he’ll do once Alfred retires, Dick goes off to college, and Kathy gives up the mantle of Batwoman. Everyone experiences fears in their lives, even Batman.

The Scarecrow appears at the wedding, releasing his fear toxin. Bruce’s greatest fear, we discover, is autophobia, which is, appropriately, the fear of being alone. As he sees each person he loves fade before him, the art has a haunting quality. The pencils and inking express a feeling of motion, as if the person is being pulled away as they fade out. He can’t see or hear Robin or Batwoman trying to communicate with him. Bruce eventually calms down and thinks of a great idea: why not go to one of my old enemies? He releases Selina out of prison so that he may find a way to defeat the Scarecrow. This may seem like your usual superhero adventure, but Brennert continues to surprise with his writing. When Batman tells Selina that it feels like his world is “shrinking”, she responds with understanding and compassion. The look on her face exudes empathy and is proof of Staton’s expertise with drawing expressive faces, utilizing Brennert’s script, and obtaining an emotional response from the reader.

The interactions between Batman and Catwoman are the highlight of this issue, shining a light on the psychological aspects of them that highlight their humanity. Superheroes can be relatable, as well as exciting. That’s why this story gets such a response from me, even after reading it consistently for almost twenty five years. I love these characters, and the creators of this tale love them as well. While Selina is patching Bruce up after battling the Scarecrow, she is shocked by the numerous scars on his back (reminiscent of Jeph Loeb and Jim Lee’s “Hush” storyline years later). She asks if it hurts and he says, “Sometimes. You learn to live with it.” He has become numb. Selina asks “Why?” and Bruce opens up to her, revealing the story of his parents’ murders and how the best way for him to deal with his past is to be Batman. It’s the only way to “get the anger out.” Selina eventually reveals her past and they both realize they are lost and alone. Batman says they “both chose our paths out of anger…and we both found ourselves trapped. You lost Selina Kyle, and I lost…someone else.” They both lost themselves and became “trapped” and controlled by their pain and the alter egos that resulted from that misery.

The final scene is glorious, breathtaking, and every superlative description that can be imagined. As Selina is about to fade away because of the effects of the Scarecrow’s toxin, Selina says there’s “only one way” to defeat the fear. She unmasks before Bruce and says “the cat is gone. There’s nothing to be afraid of anymore.” Now, she says, it’s his turn to take away her fear. The look on Batman’s face is brimming with emotions, and he seems to be on the verge of tears. Staton depicts a Batman who truly looks frightened of what comes next. In his memoir narration, Bruce says, “I knew what had to be done…but a lifetime of inhibition stayed my hand. I couldn’t–I couldn’t–I had to” and he then unmasks himself. They no longer are trapped by their pain, but have opened themselves up to life. As Bruce says in his memoir, he had given up finding “meaning in death. The meaning is in life, not death.” 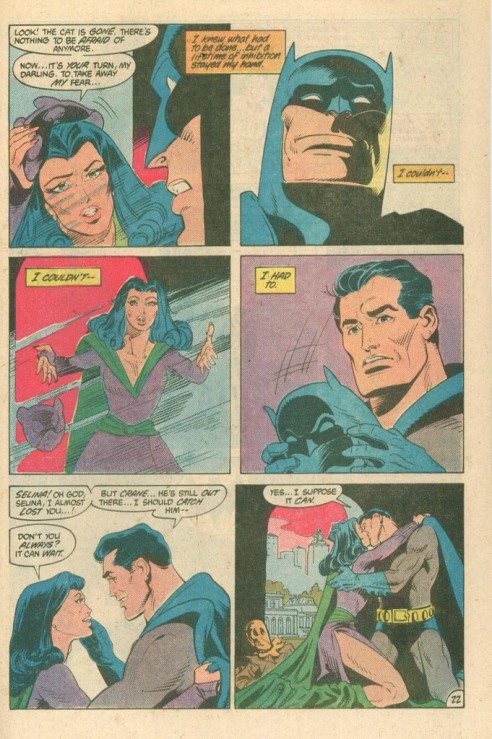 The blossoming of love between Bruce and Selina occurs during an old-fashioned tale, which is expected when, before the credits, announce this issue of “The Brave and the Bold” as “a very special tale of the Golden Age Batman.” From this simple tale, the reader can see that human feeling and depth lie beneath the capes and cowls. Psychology, emotion, and pure feelings can be experienced and felt by the reader of a superhero comic as much as any “classic” literature. As a child, and into adulthood, I realized that these characters that are beloved by so many are beloved for a reason. We care about them and, when in the hands of great writers and artists, we can stand in their shoes (or fancy superhero boots). Like Bruce and Selina, we experience life, love, fear, and enlightenment.

Although not currently in print, you can buy a copy of “The Greatest Batman Stories Ever Told” on amazon.com.