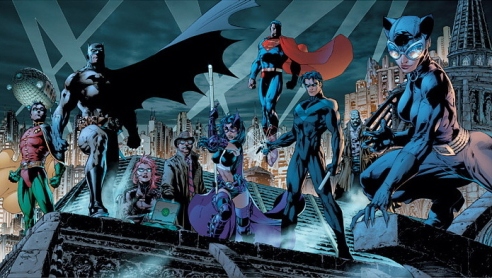 A mysterious new villain. A cavalcade of old villains. A mystery that stumps even the world’s greatest detective. Family intrigue. Love of family. Blockbuster action. These and other, sometimes, disparate, themes run through writer Jeph Loeb and artist Jim Lee’s opus that is “Batman: Hush.” This Batman tale is operatic in nature, yet also a deeply personal journey that will resonate powerfully with the reader. Loeb knows how to write characters and inject heart into a story. Along with Lee, Loeb crafts a personal yarn that is told on a large canvas. Lee’s dramatic artwork contrasts with the intimate story unfolding within Batman’s head, resulting in a style of storytelling that adds a richness to the goings-on that might not be evident with the first reading. Bruce is narrating the story as it’s happening, letting the reader in on his detective work and showing, through the narration, that Bruce loves his extended “Bat-family” and could not survive without them.

When the new mystery villain known as Hush begins to control Batman’s “family” of villains in order to defeat Bruce, the reveal of that villain is much greater because the effect he has had on Bruce goes to the core of who and what Batman is and represents to himself and those around him. Family, and whether, as Batman says, it’s a “distraction” or a valuable component to his mission, is explored through Bruce’s narration and the machinations of the story that involves a large cast of characters. The reader goes on an operatic journey with Bruce as he struggles with whether or not to let those “family” members in or push them away to the side at a safe distance. The story and art work perfectly in tandem because it’s a journey about Batman: he’s a larger than life character while in costume, yet is simply a man like everyone else underneath the cowl. He has issues with intimacy that are common and has close relationships that have complications that any human being can understand and be empathetic about. One must remember that a Batman story isn’t a Batman story without fights. This one doesn’t disappoint, highlighting his physical prowess alongside the detecting skills that define Batman.

Jeph Loeb has a talent for crafting personal tales of characters and leading the reader to feel empathy and sympathy for them as their story advances. Loeb, through the use of Bruce’s narration throughout this epic, delves into the mind of a hero who is truly conflicted about his life. He wonders if, because he has become “a monster in the night”, he has become “alone.” He wants to begin a serious relationship with Catwoman and see if he can truly be happy with someone and reconcile with the fact that he is two separate identities in one body. He realizes, as the story progresses, that he has a “family” that loves him and who are his allies, whether he’s in the guise of Batman or unmasked as his “real” self of Bruce Wayne. At the funeral for his childhood friend Tommy Elliot, Bruce thinks, “I see Dick and Tim and suddenly, my life seems that much richer.” Lines like these permeate Bruce’s inner monologue, letting the reader in on the personal growth that Bruce goes through as the story moves forward. Personal struggle is just as vital as physical struggle for the Batman of this book, with each struggle providing entertainment and enlightenment.

“Forward momentum” and “progression of character and story” are phrases that this reviewer associates with this book for a reason. The pacing of the book is expertly done, with no jarring or unresolved scenes. The fight scenes weave throughout scenes of personal interaction and evidence of close bonds between characters (such Bruce’s visit to Metropolis and his banter between him, Clark Kent, and Lois Lane). Loeb begins each chapter of the story with a conflict (usually physical) and then progresses to the mystery at hand or inserts an integral scene of a flashback. One such scene occurs when Tommy Elliot, who is a doctor, must repair a battered and comatose Bruce Wayne. Alfred has been unable to repair his “son” and must rely on Bruce’s morse code tapping to know that he must call his old friend Tommy, who is now a doctor. Tommy banters during the prep work before surgery and is extremely confident. The reader discovers their past relationship through Bruce’s narration and then the scene shifts as Tommy is operating. The watercolors of the scene indicate that it’s a flashback of Bruce and Tommy as children, and a key scene of dialogue between them is played out while they play a game of war with their toys. Tommy’s confidence and intelligence at such a young age is shown in this dialogue, which is also evident before the surgery and after, when Tommy mugs for the press and playfully informs them that the billionaire will live to see another day. Loeb crafts scenes, such as these, in order to push the story forward and plant seeds that end up growing to fruition later on down the line. Character and story are not sacrificed for the sake of being cheaply clever. Everything fits together from the beginning of the book to the last page. 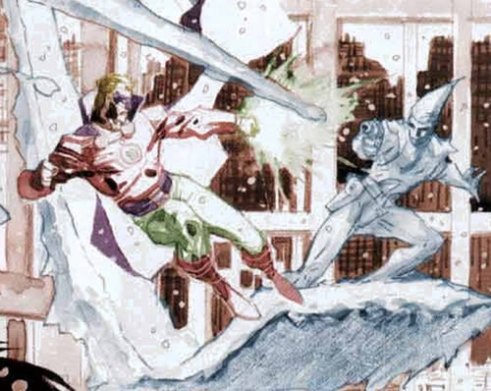 Flashbacks are important to the story and Bruce’s character arc, showing how, when a writer and artist are on the same wavelength, the writing and art can be seamlessly intertwined. Flashbacks are used to great effect by Loeb in order to flesh out the rich history of Bruce Wayne and to humanize the man behind the Bat. Flashback scenes with Bruce and Tommy as children convey how much the two acted like brothers when they were together. They had much in common, such, as Tommy points out, having two first names. More than that, they also had tragedy inform their lives at a very young age. Lee’s use of watercolors in the flashbacks are gorgeous, conveying a style that changes from his usual style the reader is accustomed to seeing expressed in his art. In a scene where Bruce and Tommy are children and visiting Metropolis, both kids are in awe of a city so large and bright compared to their Gotham City. The art is done in understated sepia ones, yet color appears in the art once the youngsters spot the first superhero they have ever glimpsed with their own eyes. What looks like the Alan Scott Green Lantern appears and the red and green stands out, yet is understated. The blueish white of the villain Icicle also stands out, with the battle between them causing the boys’ eyes to widen with awe. Because they weren’t supposed to wander the city, Bruce and Tommy are punished and must stay in the hotel room for the rest of the trip. Bruce says in his monologue, “We stayed perched by the window, hoping to get a glimpse of another hero, but none came. Soon after that, my parents were killed and I hardly saw Tommy again.” Loeb carefully chooses the words in Bruce’s head, with each one containing meaning and poetry. In Bruce and Tommy’s eyes, while looking out the window, the reader can feel a sense of despair and dejection. 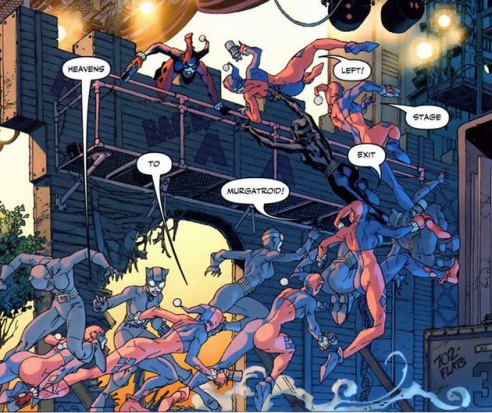 The graceful stylings of Catwoman and Harley Quinn

The obligatory fight scenes with the myriad amount of villains in the book could have turned out monotonous and by-the-numbers in a lesser artist’s hands. Comic books with bad, or mediocre at best, artwork contain generic fights that don’t contain artistry of form and style that the best of artists, such as Jim Lee, can express in their fight scenes. In many of “Hush”‘s issues’ title pages, a splash page is utilized to express grandeur and dramatic moments that belong in this Bat-opera. Close-ups add to the fights, making them seem more consequential because they’re being thrown right up into the reader’s face. Subtlety does not belong in fight scenes, and Lee knows this. Blood flies, faces are kicked in, and bones are broken. In the seventh chapter of the story, Batman beats the Joker to a bloody pulp after believing he had shot and killed Tommy Elliot. As Batman fights the Joker, smaller panels of flashbacks are interspersed and done in dramatic black and red (a nice touch that must be attributed to the vital artistic contributions of inker Scott Williams and colorist Alex Sinclair) that chronicle the horror and death that the Joker has plagued upon him and his family. Batman has a reason for having so much hatred stored up for him. In two facing pages, the left large panel of the left page has Batman’s fist meeting Joker’s chin, while the right large panel of the right page has Batman’s fist dallying with the Joker’s cheek. The power and precision of Batman’s fighting style is highlighted here, as well as throughout the book. Close-ups of the Joker’s face show the damage Batman is inflicting, making the reader cringe in shock at the violence. The physical fights are just as dramatic as the inner turmoil, with the fights contributing to the story. 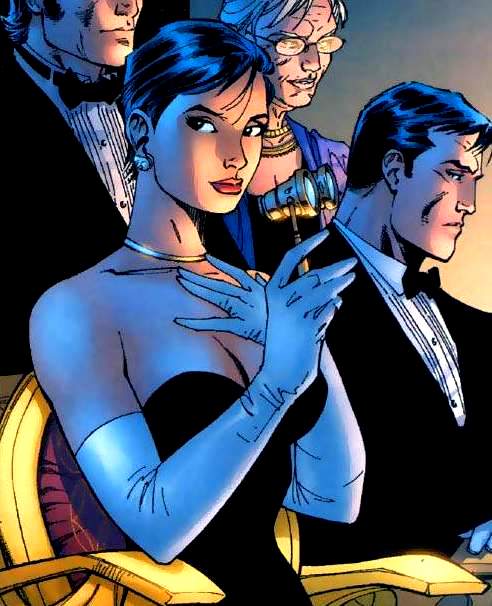 Love is in the air.

Lee, besides being great at crafting bigger than life fight scenes, can master scenes that involve subtlety and character. One instance with Bruce Wayne and Selina Kyle (Catwoman) out of costume comes to mind as an excellent example. In the first scene, Bruce and Selina are at the opera (which is a nice touch by Loeb) and the two pages that Lee creates in this scene mirror each other. On the first one, in the panel to the left, Selina is gazing at Bruce while he holds opera glasses and is looking in the opposite direction of her. In the panel to the right of the second page, Selina is now grasping the opera glasses and holding her hand to her chest demurely, while Bruce is now gazing at Selina. As the reader knows, while the story is progressing, Batman is struggling with a yearning to enter into a relationship with Selina. She has a look of curiosity on her face (again, appropriate for the story and the character) and that emotion shows through in Lee’s drawing. Bruce, however, looks at Selina with a sidelong glance, apprehensive about her and keeping his distance. All this shows through the eyes and body language, with the art adding depth without words.

Jeph Loeb and Jim Lee know Batman. They have attempted to distill the essence of who Bruce Wayne is and have succeeded in their own special way. His superior detective skills are put to use. Exceptional physical skill is depicted. A plethora of Batman’s rich rogues gallery is unleashed in a fashion that’s vital to the story (and Loeb just skimmed the Dark Knight Detective’s massive stable of villains). Most importantly, family is shown to be the one integral element of Batman’s life that keeps him sane, stable (mostly), and human. Humanity and heart, along with personal struggle, is what defines Batman in Loeb and Lee’s “Hush” and they succeed in unfolding a personal tale that’s told on an operatic scale that is truly fun and exciting to watch unfurl. Among the epic action, there are great scenes of a pure love between Bruce and his family. One scene that will truly move the reader occurs when Bruce and Tim Drake (Robin) have used their skills as a team to put one over on Catwoman. When Selina leaves, Bruce’s inner monologue states, “He wants to be the world’s greatest detective. And from what I’ve seen so far…he will someday.” No matter how hard he tries to push people away because they could be a “distraction”, he has a heart. Underneath all the dramatic goings-on of the story and the drama in his head, Batman is, at the heart of it all, a human being in the midst of a life of grand opera.

“Batman: Hush” can be purchased through cheapgraphicnovels.com, instocktrades.com, or comixology.com. 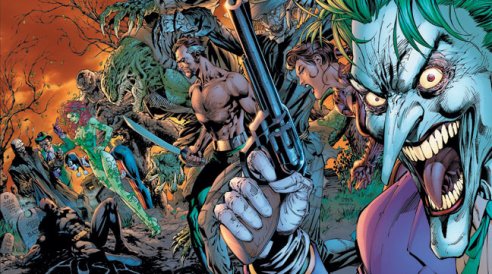